Breast cancer is one of the most common cancer diagnoses in the United States. The National Cancer Institute estimates that 252,710 American women will be diagnosed with breast cancer and 40,610 will die from the disease in 2017.1 For the majority (62%) of women with breast cancer, the disease is confined to the breast, and the 5-year survival approaches 100%.1 However, for women with metastatic disease, the likelihood of survival at 5 years drops to 27%.1

Approximately 2 of 3 women with breast cancer have tumor cells that express estrogen and progesterone receptors.2 Patients with these hormone receptor (HR)-positive cancers are most often treated with hormone therapy. Depending on whether they are pre- or postmenopausal, women with advanced breast cancer may receive aromatase inhibitors, such as letrozole, anastrozole, and exemestane, or other estrogen-blocking drugs, such as toremifene, fulvestrant, and tamoxifen.2

Because postmenopausal women with estrogen receptor–positive breast cancer can live with their disease for several years, treatments that maximize efficacy and minimize toxicity are crucial. Recent clinical trials of combination therapies for women with HR-positive breast cancer have included antiestrogens paired with aromatase inhibitors, as well as aromatase inhibitors paired with targeted agents.3

On March 13, 2017, the US Food and Drug Administration (FDA) approved ribociclib (Kisqali; Novartis), an oral CDK4/CDK6 inhibitor, in combination with letrozole for the treatment of postmenopausal women with HR-positive, HER2-negative advanced breast cancer.6,7 The FDA approval of ribociclib was based on results of a randomized study showing that ribociclib plus letrozole significantly improves PFS and overall response rate compared with letrozole plus placebo.6-8

In May 2017, the FDA approved the Kisqali Femara Co-Pack, a single package that includes ribociclib and letrozole.8

Ribociclib is an oral inhibitor of the CDK4/CDK6 pathway. Upon binding to D-cyclins, these kinases are activated to affect signaling pathways that lead to cell-cycle progression and cell proliferation.7

Ribociclib is taken orally in combination with letrozole. The recommended starting dose of ribociclib is 600 mg (three 200-mg oral tablets) for 21 days, followed by 7 days without treatment, resulting in a complete cycle of 28 days; letrozole 2.5 mg is taken once daily throughout this 28-day cycle. Ribociclib and letrozole should be administered at approximately the same time each day, preferably in the morning.7

Ribociclib can be taken with or without food; tablets should not be chewed, crushed, or split before swallowing.7

The efficacy and safety of ribociclib combined with letrozole were demonstrated in the randomized, double-blind, placebo-controlled clinical trial, MONA­LEESA-2.6,9 This multicenter study enrolled 668 postmenopausal women with HR-positive, HER2-negative advanced breast cancer.9 Patients were randomized in a 1:1 ratio to ribociclib (600 mg daily for 21 days in a 28-day cycle) plus letrozole 2.5 mg daily or to placebo plus letrozole 2.5 mg daily, and were stratified according to the presence of liver and/or lung metastases.9

All patients had an Eastern Cooperative Oncology Group performance status 0 or 1.9

At the interim analysis, PFS was not reached with ribociclib plus letrozole versus 14.7 months with placebo plus letrozole (Table).7,9 PFS and overall response rate results were consistent across patient subgroups. 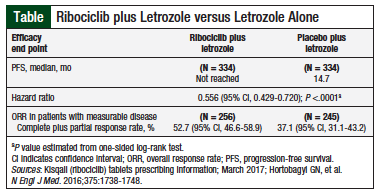 Ribociclib has no contraindications.7

Based on animal studies, ribociclib can cause fetal harm when administered to a pregnant woman; no data are available in humans. Because of the potential risk, pregnant women should avoid using ribociclib.7

Neutropenia has been observed in clinical trials of ribociclib.7

Ribociclib can prolong the QT interval in a concentration-dependent manner.7 Electrocardiograms should be repeated at approximately day 14 of the first cycle, and at the beginning of the second cycle, and as clinically indicated. Serum electrolytes should be assessed before the initiation of treatment, at the beginning of the first 6 cycles, and as clinically indicated. Any abnormality should be corrected before initiating ribociclib. Use of ribociclib with drugs known to prolong the QTc (corrected QT) interval and/or strong cytochrome P3A inhibitors should be avoided.7

Liver function tests should be performed before initiation of ribociclib, every 2 weeks for the first 2 cycles, at the beginning of each of the subsequent 4 cycles, and as clinically indicated.7

Women of reproductive potential should use effective contraception during therapy with ribociclib, and for ≥3 weeks after the last dose.7

Ribociclib is the second CDK4/CDK6 inhibitor to receive FDA approval. In the clinical trial that led to its approval by the FDA, adding ribociclib to letrozole significantly extended the PFS duration and improved the overall response rate in women with HR-positive, HER2-­negative advanced breast cancer.