LM is a 35-year-old female who was diagnosed with Hodg­kin lymphoma and treated with ABVD (doxorubicin, bleomycin, vinblastine, and dacarbazine) in 2009. Radiographic scans completed at the conclusion of therapy demonstrated that LM had achieved a complete response. Two years later, LM presented to our clinic complaining of generalized fatigue ongoing for the past 2 to 3 weeks. A complete blood count revealed an elevated white blood cell count, and findings from a bone marrow biopsy were consistent with acute myeloid leukemia (AML), likely associated with her prior exposure to chemotherapy.

In our community cancer center, identifying and diagnosing a second malignancy in a patient like LM is highly unusual. However, as one of a constellation of known survivorship issues in patients treated with chemotherapy and/or radiation therapy, we teach pharmacy students and medical residents training at our site to internalize a philosophy of “pattern recognition.” This idea suggests that any patient returning for a routine follow-up/monitoring visit is comprehensively assessed not only for recurrence of their malignant disease (eg, the pattern of where that disease may likely spread via metastasis) but also for chronic issues that may stem from their prior therapy. While secondary malignancies may be rare, issues such as cardiotoxicity, hypothyroidism, infertility, neurocognitive deficits, depression, anxiety, peripheral neuropathy, etc, are observed with greater frequency and are often better identified and managed when multiple providers are involved in a multidisciplinary approach to cancer care.

Because many of the most common cancers are diagnosed in the sixth to eighth decade of life, historic data on survivorship issues were predominantly generated from long-term monitoring of pediatric cancer patients surviving into adulthood. However, as the body of knowledge related to cancer biology has grown and new drugs for cancer have continued to find their way into clinical practice, cure rates and overall survival for adult cancer patients have increased over the past few decades. The result is an increasing number of patients alive for whom survivorship issues are relevant, necessitating ongoing monitoring and possibly requiring intervention. In fact, it is estimated that as of 2009 there were 363,000 survivors of childhood cancer in the United States.1 Combine this statistic with data from the American Cancer Society estimating that from 1971 to 2012 the overall number of cancer survivors grew from 3 million to 13.7 million and is projected to increase to 18 million by 2022, and survivorship concerns become a major problem that the oncology community must accept and adapt to and comprehensively address.2,3

As oncology providers, we must first recognize that not all survivorship issues are created equally. In 1985, an often-cited landmark report on cancer survivorship was published in which physician Fitzhugh Mullan described his own battle with cancer and the unique issues that lay ahead for survivors of malignancies. Writing from a personal perspective, he identified 3 “seasons of survival” for cancer patients: acute survival, defined as the time from new diagnosis through completion of initial treatment; extended survival, describing the time during which patients experience anxiety related to the possible recurrence of their disease, often beginning with the end of initial treatment; and permanent survival, when the patients recognize the likelihood of being cured of their disease.4 While Mullan’s words are now nearly 30 years old, they still provide guidance to us today.

We will focus our discussion on late effects encompassing both chronic health conditions and severe or life-threatening problems (Mullan’s permanent survival period), as it has been estimated that as many as 50% of survivors experience such issues.5 As a clinical oncology pharmacist charged with monitoring and educating cancer patients about their drug therapy, I take survivorship issues personally since it is generally understood that the chemotherapy and/or radiation therapy we use every day is responsible for these dreadful chronic issues.

As in the case of LM, we identified that secondary malignancies are uncommon yet account for as much as 16% of all cancer diagnoses.6 Furthermore, the risk of a cancer survivor developing a secondary malignancy is 10-fold higher than in the general population.1 Certain patterns emerge when we look more closely at this small yet important cohort of cancer patients. Hematologic secondary malignancies such as AML have been associated with the use of alkylating agents (in our example, LM was exposed to dacarbazine) and/or topoisomerase II inhibitors. Characteristic cytogenetic abnormalities involving chromosomes 5 or 7 in the case of alkylating agents or chromosome 11q23 in the setting of topoisomerase II inhibitors should be investigated in patients previously treated with these agents. Some commonly observed solid secondary malignancies include breast, lung, and thyroid cancers and brain tumors.1 This latter group of cancers are often related to a patient’s previous exposure to radiation therapy. This explains the increased incidence of medial lung and breast cancers diagnosed in patients who received mantle radiation, most often in the setting of mediastinal tumors associated with Hodg­kin lymphoma. Latency periods for hematologic secondary malignancies are often 5 to 10 years versus a longer time for solid secondary malignancies, thus creating a compelling case for indefinite oncologist oversight of these patients.7

Perhaps the most well-characterized chemotherapy-related survivorship issue is the development of cardiovascular disease associated with anthracycline exposure. Patients beginning therapy with these agents often, if not always, undergo assessment of their left ventricular ejection fraction by echocardiogram or multigated acquisition scan. Additionally, cumulative exposure to an anthracycline is closely monitored to ensure patients do not exceed well-established lifetime maximum doses. Data from long-term monitoring of adult survivors of pediatric malignancies reveal a 15-fold increase in the risk of developing congestive heart failure (CHF) compared with age-matched controls.8 Overall survival in patients who develop CHF in this setting is less than 50% at 5 years and argues for the importance of patients understanding the risks of treatment and their ability to inform other healthcare providers of their total anthracycline dose.1

There are many other well-defined examples that could be cited here to illustrate the importance of aggressively monitoring cancer survivors, early identi­fication of these survivorship issues, and early intervention when issues arise. Cancer centers on the cutting edge of survivorship management focus on the creation of survivorship care plans in an attempt to minimize the possibility that patients are lost to follow-up or receive anything less than optimal long-term monitoring and care. These care plans often comprehensively include the specific type of cancer the patient was diagnosed with, the drug therapy plan complete with drug doses, any toxicities the patient experienced during treatment, and any long-term issues experienced by the patient. Furthermore, this care plan should identify which providers are to be involved in the patient’s ongoing care as well as a schedule for monitoring and assessment.9

Even with the recognized importance of cancer survivorship issues and the development of survivorship care plans, patients still fall through the proverbial cracks in the healthcare system. Cheung and colleagues reported in 2009 the results of a study evaluating patient and physician expectations of survivorship care. Among the observations in this report is that patients exclusively monitored by primary care physicians underwent “fewer screening tests for cancers, whereas those assessed predominantly by oncologists receive less than recommended noncancer-related care.”10 Current medical practices may not adequately define the best collaboration of providers to ensure the patient’s total care is appropriately addressed. Most certainly there is room for improvement in this area!

Once again, we return to the idea of the multidisciplinary nature of modern oncology medicine. In the accompanying article, Beth Faiman discusses the role of nurses in identifying and referring patients to survivorship programs. Our nurses and nurse practitioners are also engaged in this role, which complements and enhances our team approach to these patients. Pharmacists, including myself, frequently find themselves in a role of patient education, monitoring, and direct management of supportive care issues. Perhaps the greatest contribution in the setting of cancer survivorship is the aspect of patient monitoring. Upon return to the clinic, even years after completion of therapy, I closely review the patient’s drug therapy, exposure to radiation therapy (if applicable), and make recommendations to our oncology team related to oversight of these real or potential long-term complications of cancer treatment. An additional role of the oncology pharmacist involves ongoing patient education. Some may wrongly assume that patient education related to chemotherapy is an acute issue undertaken and often forgotten after the patients begin their initial therapy. However, studies have suggested that only 72% of patients can accurately report their precise cancer diagnosis, 52% of patients receiving anthracycline-based therapy with doxorubicin could report their dose exposure, and 70% of childhood cancer survivors could appropriately report the anatomic site treated with radiation therapy.7 If patients are to be empowered to advocate for their own healthcare, they need to be re-educated about key factors that may contribute to chronic survivorship issues so that these can be reported to future healthcare providers.

In the case of LM, her response to therapy for AML was poor, and she succumbed to her disease within a period of months following diagnosis. Despite her poor outcome, tremendous hope can now be identified in patients who live longer, better, and are more frequently cured than ever. While our focus never deviates from our established goals of cancer treatment, we must not lose sight of the patient’s overall health in an ongoing manner. For this, all members of the oncology healthcare team must be educated on survivorship issues, must be comfortable in proactively discussing these issues with patients, and must be actively involved in ensuring a patient’s ongoing access to care. Each patient diagnosed with a chronic survivorship issue that might have been mitigated through monitoring or aggressive intervention represents a failure of the oncology system. Such failures cannot be accepted as more and more patients will become cancer survivors over the decades to come. 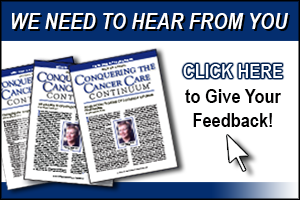