Upper GI Cancers: Are We Getting Value for the Money?

CHICAGO—At the ASCO session “Moving the Bar in Upper GI Malignancies,” 2 speakers examined whether recent trials of targeted agents are clinically meaningful or just statistically positive, and whether value is being gained for the enormous amount of money being spent in treating noncolo rectal gastrointestinal (GI) cancer.

Eileen Mary O’Reilly, MD, of Memorial Sloan-Kettering Cancer Center, weighed in by examining the bottom line of the major trials.

The only true “practice-changing” study, in her opinion, involved trastuz - umab as treatment for gastric cancer. The rationale is strong, she noted, based on the discovery that human epidermal growth factor receptor (HER) 2 is overexpressed in many gastric tumors. In the phase 3 Trastuzumab for Gastric Cancer (ToGA) trial, trastuzumab added to capecitabine and cisplatin improved overall survival (OS) from 11.1 months to 13.8 months with chemotherapy alone, constituting a 26% reduction in death. The effect was robust in the subset who strongly overexpressed HER2.

In contrast, in pancreatic cancer, the pivotal National Cancer Institute of Canada Clinical Trials Group PA.3 trial of erlotinib plus gemcitabine versus gemcitabine alone is “an ex - ample of a statistically significant phase 2 trial that has clinically limited therapeutic impact,” O’Reilly maintained. The median OS was improved by <1 month, as was progression- free survival (PFS); however, these small differences were statistically significant, and the US Food and Drug Administration approved erlotinib for pancreatic cancer based on these results.

For pancreatic neuroendocrine tumors, “we don’t yet fully know” the true benefit of everolimus and sunitinib, which have led to improvements in outcomes and represent new options for a rare malignancy. Many questions remain, such as the best time to initiate therapy with these drugs and how to sequence and combine them with other treatments, O’Reilly said.

“In the era of cost constraints, we must recognize that all these agents are palliative, all are expensive, and all have added toxicity,” she concluded. Future investigations must be based on strong biologic rationale, robust earlyphase results, and intelligent trial design, she added.

Neal J. Meropol, MD, of Case Western Reserve University in Cleveland, who speaks often about the economics of cancer care, said he was “providing perspective on how to interpret these claims.”

His ranking of the clinical benefit of upper GI cancer treatment, largely based on the magnitude of the statistically significant differences in PFS and OS, compared with standard treatment was as follows:

Meropol then assessed the value of the new upper GI cancer regimens, demonstrating that clinical benefit is often not parallel with value (Table 1).

Meropol said the “trastuzumab story” is informative regarding the future of oncology clinical trials and oncology care. He reminded the audience that although trastuzumab has become an important treatment in gastric cancer, its effect, compared with the drug’s impact on breast cancer, is minimal. In metastatic breast cancer, trastuzumab prolonged median OS by nearly 5 months; in advanced gastric cancer, it added a median of 2.7 months. In patients with highly overexpressed HER2, however, the additional benefit exceeded 4 months, thus offering somewhat higher value in this subset, he acknowledged.

The “lessons,” according to Meropol, are that diagnostics development must begin early and in concert with clinical development, that all cancers will be “rare” cancers once their molecular profile is understood, that “blockbuster drugs” will become dinosaurs (ie, no one drug will fit all), that the bar must be set high early in drug development, and that treatment based on site of origin will be replaced by treatment based on phenotype.

Ever-Greater Targeting Will Be the Norm

Smaller patient populations will eventually become defined for essentially all tumor types, necessitating ever more targeted treatments as the norm. The effect of this on drug development and cost control remains unclear (Table 2). 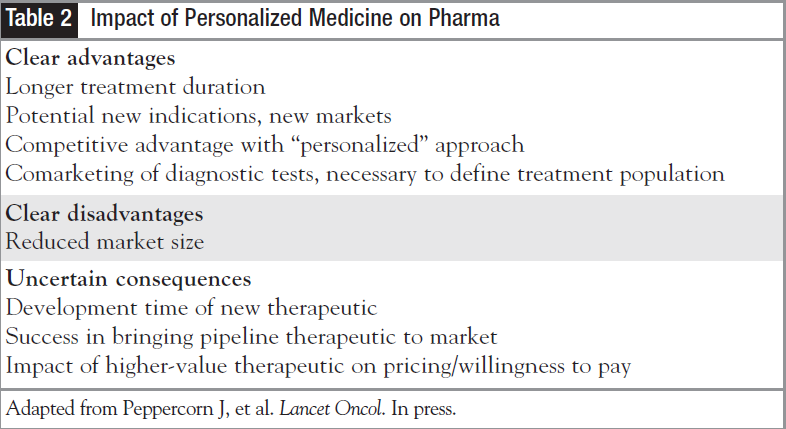 “Will this prolong drug development time and reduce the chances of bringing drugs to market? Will the higher value of the targeted approach bring even higher prices to make up for smaller markets? The answers to these questions are unknown,” he said.

Where We Need to Go

Meropol offered some concrete suggestions for “where we need to go” in the future treatment of cancer. His suggestions included the following:

Value-based insurance design may be a viable strategy for achieving some of these goals and is gaining traction, he noted. “Not all effective treatments have equivalent value. Cost-sharing can be used to discourage low-value treatment and encourage high-value treatment, in contrast with current plans that base coverage on cost,” he said. “There would be the potential for different coverage based on the disease and stage.”

“The low-hanging fruit is cost-sharing that is not based on the cost of the intervention but its value,” he maintained. Finally, he emphasized that in the allocation of finite resources “the goal is to move from implicit decisions about allocation to explicit and transparent ones,” adding that politics will impact this process.