In a “Technical Issues” session at the Hematology/Oncology Pharmacist Association annual meeting, Bhavesh Shah, RPh, BCOP, a clinical pharmacy specialist in hematology/oncology with Boston Medical Center, in Massachusetts, discussed dose-rounding, rapid infusion, and other strategies his center has adopted to reduce costs. Prior to establishing measures your oncology practice can implement to lower expenses, you need to review your physicians’ prescribing habits, identify causes of drug waste at your facility, and look for outlays in time or product that are not captured in reimbursement channels. 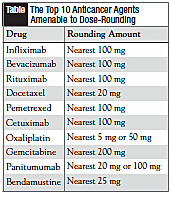 Dose-Rounding
A cost-saving measure that some inpatient pharmacies have implemented is rounding the dose of certain biologic anticancer drugs to within 10% of the amount ordered. The purpose of doserounding strategies is threefold, said Shah: (1) to ensure the drug is measured accurately; (2) to minimize drug waste; and (3) to maximize cost avoidance. He listed the 10 drugs most amenable to dose-rounding (Table).

A dose-rounding program is only as effective as the level of adherence by pharmacy clinicians. A retrospective study published in 2010 by Winger and associates found that a 3-month pilot program in 2005 to round doses for orders of 7 biologic anticancer agents would have produced a 42% reduction in drug wastage and $24,434 in savings had there been 100% compliance with the program. Because 29 of the 126 orders were not filled according to the dose-rounding protocol, savings only amounted to $15,922. A dose-rounding program should include measures for monitoring adherence.

“We developed this because a lot of chemotherapy was being administered in the hospital, primarily due to convenience, where we got reimbursed by DRGs [diagnostic-related groups] but not based on what the patient was actually receiving,” Shah explained. Medicare allows only 1 DRG for inpatient claims, whereas outpatient claims can use multiple ambulatory payment classifications (APCs). Chemotherapy drugs are not bundled under APCs, allowing higher reimbursement.

“Now, we always push our physicians to do it on the day of or the day after hospital release so we can capture that cost,” he said. Shah said implementing this program decreased orders for inhospital chemotherapy administration by 50%.

Test Rituximab Before Infusion
Another new policy at Boston Medical is to administer a test dose of rituximab prior to infusion. Shah said 80% of patients on rituximab have a reaction to their first infusion that leads to discontinuation and drug waste. In 2009, infusion reactions led to $50,000 in wasted rituximab.

Now a 100-mg dose is administered to all patients scheduled for rituximab infusion who have not received the drug for ≥6 months. In fiscal year 2010, Boston Medical Center saved approximately $2000 per patient prescribed rituximab.

Follow Guidelines for Pegfilgrastim
When Shah and his colleagues were seeking ways to reduce costs, they saw that orders for pegfilgrastim had increased. Based on data from a study by Sugarman and colleagues in the 2009 issue of Breast Cancer Research and Treatment, they concluded it might be safe to delay administration of white blood cell growth factor support for patients treated with paclitaxel and tested the theory in a small group of patients.

For 10 patients prescribed 4 cycles of paclitaxel (175 mg/m2 every 2 weeks), the center administered a single dose of pegfilgrastim with the first dose of the second cycle of paclitaxel. All patients completed therapy without delay, with no neutropenic events or hospitalizations observed. Shah speculated that delaying pefilgrastim led to less bone pain from paclitaxel-induced arthralgia. It also produced $60,000 in savings.

Shah and his colleagues found pegfilgrastim was sometimes administered as primary prophylaxis in situations inconsistent with National Comp rehensive Cancer Center and American Society of Clinical Oncology guidelines. “There was a lot of inappropriate utilization, in metastatic prostate cancer, stage IV non– small cell lung cancer [NSCLC], and metastatic colon cancer,” said Shah. They requested that physicians stop using growth factor support when the intent was not curative and they could use dose reductions or delays. Physicians were also told to stop giving it to patients receiving chemotherapy with curative intent and an associated incidence of febrile neutropenia <20%.

In requesting that physicians adhere to evidence-based guidelines for pegfilgrastim use, Shah said they required administering it in the adjuvant setting for patients with colorectal cancer and NSCLC, the neoadjuvant setting for patients with solid tumors whose operative procedure had curative intent, and for patients with a malignancy related to acquired immunodeficiency syndrome (AIDS). Even with requiring pegfilgrastim use in these circumstances, Shah said they decreased expenditures for the drug by $250,000 annually. This does not factor in costsavings that might have occurred as a result of ensuring that patients who should get the drug received it.

Rapid Infusion
Shah described himself as a fan of rapid infusion where appropriate, but he noted that no formal economic analysis has ever been presented on its cost-effectiveness. Agents to consider for rapid infusion are the monoclonal antibodies ri tuximab, bevacizumab, trastuzumab, cetuximab, and low-molecular-weight (LMW) iron dextran. “This can increase your resource utilization,” said Shah.

A 2007 study published in Blood by Sehn and associates tested a 90-minute rituximab infusion in >1200 patients. They reported a 0% rate of grade 3/4 toxicity related to the faster infusion. Other studies have found 30-minute infusions of trastuzumab (6 mg/kg) and bevacizumab (0.5 mg/kg/min) and 60- minute infusions of cetuximab (500 mg/m2) and LMW iron dextran (1 g) to be relatively safe. A higher rate of adverse events was observed in patients allergic to >2 drugs who received LMW iron dextran; several patients in the bevacizumab study who received 15 mg/kg over 30 minutes experienced hypersensitivity reactions. Shah cautioned that Dexferrum—another form of iron dextran—“shouldn’t be used in a rapid fashion.”

“I think rapid infusions are great. It totally increases the volume for your clinic and decreases the absentees, and you can get your patients out faster.” Shah said it also increases satisfaction among patients and nurses.

Cetuximab versus Panitumumab
At Boston Medical Center, Shah said it was decided to switch from cetuximab to the lower-cost panitumumab for colorectal cancer based on studies showing little difference in overall response rate, progression-free survival, or overall survival. Shah said although the cost per 100 mg is higher for panitumumab than for cetuximab ($618.81 vs $367.83, respectively), cetuximab requires an 8-vial loading dose. A cost analysis found that the cost for 4 weeks of panitumumab averaged $5953.70 compared with $8460.09 for cetuximab. In addition, reimbursement from the Centers for Medicare & Medicaid Services (CMS) was higher for panitumumab than for cetuximab ($49.737/10 mg vs $87.326/10 mg). Other savings were realized with panitumumab in reduced chair time, because it can be administered every 2 weeks, and in significantly less expense to treat febrile neutropenia.

Handling Waste
Any number of events can lead to drug waste. “There was a technician who put our cetuximab into the freezer and that had to be wasted,” said Shah. “There was a physician who decided not to treat the patient after it was mixed.” He related an occasion when a nurse spiked the bag. “We also see a lot of single-dose vial waste because you can’t round to the nearest vial size, like with oxaliplatin.”

Shah said Boston Medical Center takes advantage of biooncology spoilage programs offered by pharmaceutical companies. “They’re not well known, and you have to actually call, but once you find the forms, it’s pretty easy,” he said. If the cause of the waste is not listed, most forms provide a space to add it. Shah said the companies evaluate the requests on a case-by-case basis.

“We had about $20,000 in waste that we saved last year using these programs. Fill out a form and they send you a check for the drug that’s been wasted,” said Shah.

Adopting programs to minimize waste allows you to request reimbursement from CMS for “discarded drug/ biological remaining in a single-use product after administering what is reasonable and necessary for the patient’s condition,” per Pub. 100-04, Chapter 17, Section 40 in the Medicare Claims Processing Manual.

Shah said, “There’s a JW code that mirrors the J code you’re billing for.” The CMS policy requires documenting the cause of waste in the patient’s medical record, and that is another policy Boston Medical Center has implemented to ensure that those costs can be recovered.

The most important consideration when looking for ways to save costs is patient safety. Shah recommended ensuring that all the changes you decide to implement align with evidence- based national guidelines for cancer care.