Bevacizumab in Metastatic Breast Cancer: Is This the End of the Line?

Bevacizumab (Avastin; Genentech) for metastatic breast cancer may be one of the most widely debated, media-reported, and editorialized agents in oncology. This is certainly understandable in an era when targeted therapy such as bevacizumab, a monoclonal antibody against the vascular endothelial growth factor, holds high expectations to provide a much-needed treatment option for thousands of women with metastatic breast cancer. It is currently the best selling anticancer drug in history, even with its high price tag—the annual sales have exceeded $6 billion, with $1 billion per year used in breast cancer.1

The main sources of controversy leading to the US Food and Drug Administration’s (FDA) reversal of its approval for this indication, as outlined in the timeline (Table 1), surround several very important as yet unanswered questions that may determine the fate of many investigational agents in the future. 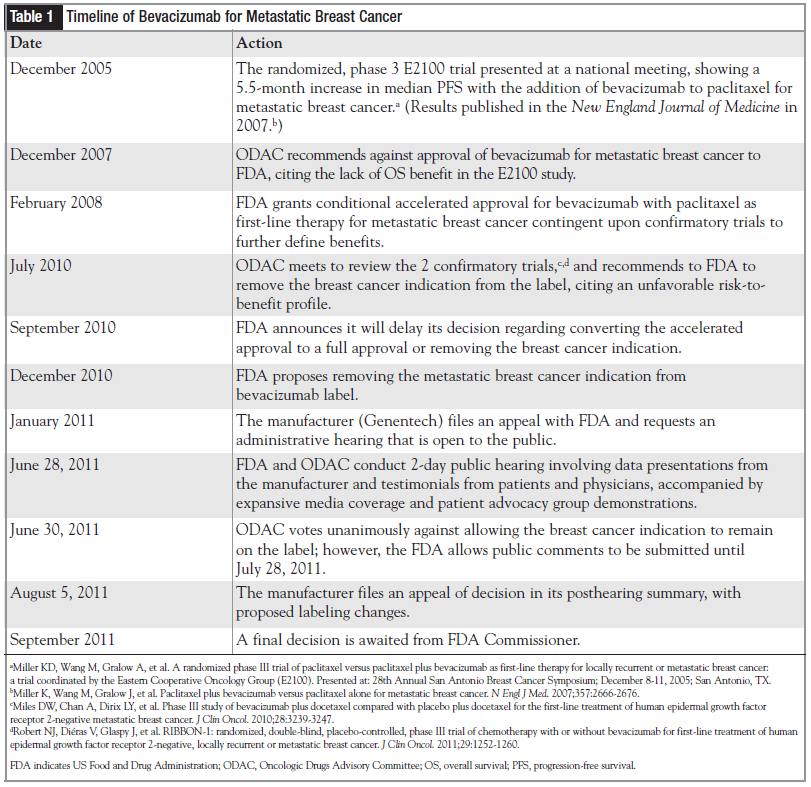 The most important and most contested question concerns what is an appropriate, clinically significant end point in clinical trials of new agents to decide their FDA approval: progression free survival (PFS) or overall survival (OS). Further, when considering the adverse event profile in relation to any apparent benefit, what is an acceptable risk-to-benefit ratio? Adding to the controversy is the valid arguments on both sides of the issues, with breast cancer experts, organizations, and even members within organizations such the FDA and its Oncologic Drugs Advisory Committee (ODAC) appear to be split on these issues. ODAC is a committee that consists of members representing cancer and statistics experts, industry, and the public that is charged by the FDA to evaluate study data and to make recommendations to the FDA about the approval of new cancer medications.

The historical timeline of bevacizumab for metastatic breast cancer starts in 2005 when the Eastern Cooperative Oncology Group (ECOG, or E) 2100 study was presented amid much excitement at a large international meeting2 and was subsequently published in the New England Journal of Medicine in 2007.3

The primary end point was PFS; secondary end points included objective response rate, toxic effects, OS, and quality of life. Patients with HER2-positive breast cancer were eligible, provided they had received trastuzumab. Ultimately, few patients with HER2- positive disease were enrolled. Patients who received previous taxane therapy as adjuvant or neoadjuvant therapy were required to have received their last dose at least 12 months before enrollment.

Results demonstrated a significant improvement in median PFS with the addition of bevacizumab (11.8 months vs 5.9 months; hazard ratio [HR], 0.60; P <.001). Median OS, however, was similar between groups (25.2 months in the paclitaxel-alone group vs 26.7 months in the combined therapy group; HR, 0.88; P = .16). On subgroup analysis, no subgroup was identified as most likely to benefit from the combination therapy. 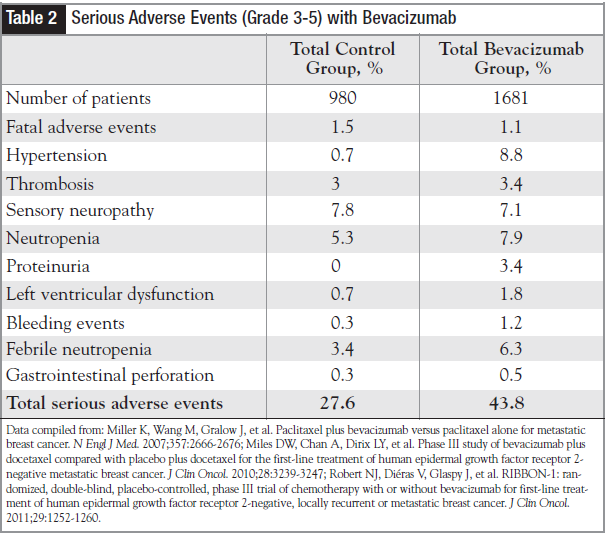 The debate began in December 2007 when ODAC recommended, in a split decision, against approval of bevacizumab. The FDA, in a move rare in its history, overrode its own committee in granting conditional accelerated approval on the basis of the pivotal E2100 study in 2008. This suggested that the FDA accepted the end point of improvement in PFS, even with a lack of OS benefit, as observed in the E2100 study, for approval of an oncology agent, although most ODAC members appeared to disagree with this decision.

The controversy is complicated by the seemingly unclear or even contradictory stance by the FDA about what it considers a “gold standard” study end point for FDA approval; however, the role of conditional or provisional accelerated approval, as opposed to full approval, must be put in perspective. Introduced in 1992, the accelerated approval process was originated so the FDA could grant marketing authorization, or provisional approval based on surrogate end points such as PFS, conditional on additional studies to further define clinical benefit, for agents that fulfill unmet medical needs, such as for HIV/AIDS and cancer. This process provides for more rapid access of these medications to populations with few treatment options, but does not guarantee a conversion to full approval after further studies are complete. An agent that was available, therefore, could be later taken off the market when its approval is rescinded, such as the case with the antileukemia agent gemtuzumab ozogamicin.4

For bevacizumab, not only was full approval not granted, but also withdrawal of approval was determined. This decision was based on 2 factors: an unclear clinical benefit when evaluating the end point of PFS compared with OS; and concern about the benefit- to-risk ratio. These evaluations were based on the release of 2 manufacturersponsored confirmatory trials: Avastin and Docetaxel (AVADO) and Regimens in Bevacizumab for Breast Oncology (RIBBON)-1.

Similar to the E2100 trial, more patients in the bevacizumab arms experienced grade 3 and 4 toxicity, especially neutropenia, febrile neutropenia, and hypertension (Table 2). The second trial, RIBBON-1, was an international, phase 3, multicenter, placebo-controlled study in treatmentnaïve patients.6 Before enrollment, the investigators selected the chemotherapy regimen of either capecitabine, or taxane/ anthracycline. Patients then were randomized 2:1 to bevacizumab or placebo. The bevacizumab dose was 15 mg/kg every 3 weeks. Patients in this trial were permitted to receive open-label bevacizumab 5 mg/kg per week as secondline therapy after progressive disease. The RIBBON-1 trial used the same primary and secondary end points as the E2100, along with similar schedules and criteria to assess patients.

Again, the OS was not statistically significant among groups. In the capecitabine group, the HR for OS was 0.85 (P = .27), whereas in the taxane/ anthracycline cohort, the HR for OS was 1.03 (P = .83). Of note, after progression, 54.4% of the capecitabinealone patients and 50.7% of the taxane/ anthracycline patients received open-label bevacizumab.

Both RIBBON-1 and AVADO did not appear to confirm the impressive 5.5-month median PFS increase seen in E2100 and confirmed a lack of OS benefit. In July 2010, therefore, ODAC met to consider these 2 trial results to recommend to the FDA either the conversion to full approval or withdrawal of approval. The committee voted 12:1 to recommend that the FDA remove the indication for metastatic breast cancer from the label, citing that the data demonstrated that PFS did not appear to act as a surrogate for OS and, therefore, a lack of favorable risk-to-benefit profile.

Following an extended review period by the FDA, which heightened expectations and resulted in emotionally charged media coverage of the impending decision, the FDA announced its plan to withdraw approval in December 2010. However, the manufacturer soon appealed by filing an opposition petition to request an administrative hearing open to the public. The focus of the appeal was mainly contingent upon the increase in PFS shown in the E2100 trial, although that trial had been criticized for being open label, making quality- of-life data less meaningful.7 Also, they argued E2100, RIBBON-1, and AVADO used PFS as the primary end point based on the assumption that the FDA accepted this end point for approval and, therefore, the trials may have been underpowered to address OS. Furthermore, PFS may be considered an important end point for patients, because it may delay symptoms and improve quality of life.

In addition, in metastatic colorectal cancer, PFS is considered a valid end point for drug approval. Additional points outlined in the appeal were that the large difference observed in PFS in the E2100 trial was not replicated in subsequent trials because of the lower dose intensity of docetaxel compared with the E2100 paclitaxel trial, which resulted from increased toxicity of docetaxel, and that there is a potentially synergistic effect between paclitaxel and bevacizumab that may not occur with other combinations. There are no data to substantiate these claims, however.

The confusion by the public over the seeming back and forth on bevacizumab’s efficacy is certainly understandable when many experts, organizations, and agencies—not just the FDA and ODAC—remain divided on many issues. Other agents for metastatic cancers have been FDA-approved on the basis of a median PFS increase alone. Indeed, bevacizumab remains approved for breast cancer in several European countries and remains on the list of preferred regimens (with paclitaxel) for HER2-negative breast cancer by the National Comprehensive Cancer Network (NCCN) 2011 breast cancer guidelines, albeit with a statement that it does not increase OS.8

Additional debate also concerns whether OS is measurable in future metastatic breast cancer trials. This is especially challenging, because patients have several options for treatment of refractory disease that cannot be standardized in trials, as well as the crossover or access to the study agent after trial completion. Another valid argument is that sponsors should still be encouraged to design studies to address this very important end point. Despite these concerns, the recent FDA approvals of other agents for metastatic breast cancer, such as eribulin, were approved on the basis of statistically significant increases in OS.9

Unlike metastatic breast cancer, PFS recently has been validated statistically as a surrogate end point for OS in metastatic colorectal cancer.10 In addition, not all regimens recommended in NCCN guidelines for every cancer site and stage, or treatment line, are FDA approved regimens. Unfortunately, there are not strong data to support the connection between quality-of-life data and extension of PFS in breast cancer, although this should be a research focus of the near future.

Certainly the patient’s perspective about the understandable desire to access alternative treatment options should be considered strongly; and it was considered by the FDA and ODAC officials, during the 2-day public hearing in June 2011. This hearing not only included the manufacturer’s as well as patient perspectives, but also provided for physician testimonials along with much media interest.

The ODAC opinion regarding the lack of OS benefit and the questionable PFS benefit in light of the risk of serious adverse effects remained unchanged as the FDA members voted unanimously against allowing the breast cancer indication to remain on the label. Again, the manufacturer soon appealed, this time proposing labeling changes to enable a continuation of the conditional accelerated approval until a confirmatory trial of paclitaxel plus bevacizumab—the apparent preferred combination—powered to assess OS can be completed.11 The proposal includes revising the labeling to restrict treatment to women with an “unmet medical need, that have fewer treatment options,” which is detailed in their proposal as women with triple receptor (estrogen/progesterone receptor [ER/PR] and HER2 receptor)-negative breast cancer, or ER-positive women with aggressive (rapidly progressing) disease with symptomatic visceral metastases. They also propose to restrict bevacizumab use to be with paclitaxel only, with updated trial data about differing efficacy with other chemotherapy partners, and to commence a Risk Evaluation and Mitigation Strategy that would require distribution of a medication guide to every physician and patient containing detailed safety information, including serious adverse events.

The final chapter of this controversy is not written yet, as the FDA Commissioner has not made a final decision on the process of withdrawal of the breast cancer indication, and the date of this decision remains unknown. Even the definitions of serious adverse events and “unmet medical need” are now a source of debate—the manufacturer argues that the risks appear manageable, whereas others report that bleeding and thrombotic events carry significant risks. Experts continue to argue that there are other treatment options for metastatic breast cancer; therefore, bevacizumab is not fulfilling an unmet need. The high risk subpopulations as defined previously have not been identified statistically to have greater responses to bevacizumab in the clinical trials. Certainly, there is an argument made by patients who have had a good response to this treatment and want to continue to have access to as many options as possible for the treatment of a serious, incurable disease.

The impact of this decision also remains unknown and leaves many questions unanswered.

Clearly studies need to continue to clarify whether PFS may be a surrogate for OS in metastatic breast cancer, and whether an increased PFS confers any benefit on quality of life. Ultimately, the goal would be to identify women through genetic or other markers who will most benefit from treatment. Until then, questions remain regarding the use of bevacizumab, including is this the end of the line for this agent in breast cancer?