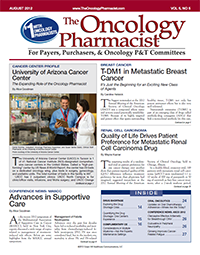 The biggest newsmaker at the 2012 Annual Meeting of the American Society of Clinical Oncology (ASCO) was a compound whose name and actions sound practically missilelike: T-DM1. Because of its highly targeted and potent effect that spares surrounding healthy tissue, T-DM1 not only has potent antitumor effects but is also very well tolerated.

The surprising results of a randomized trial on patient preference for one cancer therapy over another show that patient-reported quality-of-life (QOL) differences influence treatment preference far more than physicians had imagined, suggested researchers at the 2012 Annual Meeting of the American Society of Clinical Oncology, held in Chicago, Illinois.

At the recent 2012 symposium of the Multinational As sociation of Supportive Care in Cancer (MASCC), held in New York City, experts discussed a wide range of topics related to management of treatmentinduced side effects. Below are some highlights from the MASCC annual symposium.

The drug shortage crisis is easing, but an actual solution to the problem is still elusive, according to participants in a press briefing that addressed the issue at the 2012 Annual Meeting of the American Society of Clinical Oncology (ASCO) held in Chicago, Illinois.

Richard Schilsky, MD, chair of ASCO’s government relations committee and an oncologist at the University of Chicago, indicated, “Patient care has been threatened in many cases. But the good news is that the frequency of drug shortages is beginning to decline.”

At one New York medical center, half of the cancer patients required drugs that were considered in short supply in 2010 and 2011, and 10% were forced to receive an alternative, according to a study presented at the 2012 ASCO Annual Meeting (Abstract 6114).

While the investigators hope that this did not compromise efficacy, about one-third of the time the physicians felt the substitute was inferior, said Daniel J. Becker, MD, of St. Luke’s-Roosevelt and Bet h Israel M edic al Center, New York, who led the study presented at ASCO.

Patients with breakthrough chemotherapy-induced nausea and vomiting (CINV) can gain superior relief from olanzapine (Zyprexa), a drug approved by the US Food and Drug Administration as an antipsychotic, compared with standard antiemetic therapy with metoclopramide. The results from this phase 3 study address an important unmet need for patients who experience these side effects despite being given standard antiemetic therapy.

The antidepressant duloxetine (Cymbalta) appears to reduce painful peripheral neuropathy associated with taxane- or platinumbased chemotherapy in some, but not all, patients, according to a randomized phase 3 study presented at the 2012 Annual Meeting of the American Society of Clinical Oncology (ASCO). About one-third of patients treated with duloxetine reported at least a 30% or greater reduction in pain scores versus 17% of placebo patients.

Ginseng has significant activity against fatigue in adults with cancer, according to a randomized trial.1 Eight weeks of treatment with ginseng significantly improved fatigue scores by 20% versus 10% for patients treated with placebo (P = .003). Moreover, ginseng was as safe as placebo in this preliminary trial.

The University of Arizona Cancer Center (UACC) in Tucson is 1 of 41 National Cancer Institute (NCI)-designated comprehensive cancer centers in the United States. Called a “high-performing” center by US News & World Report, the center has 29 beds on a dedicated oncology wing, plus beds in surgery, gynecology, and pediatric units. The total number of beds in the facility is 487.