Breast cancer is one of the most common cancer diagnoses in the United States. The National Cancer Institute estimates that 231,840 American women will be diagnosed with breast cancer, and nearly 40,300 women will die from the disease in 2015.1 Overall, 61% of women with breast cancer are diagnosed while the disease is confined to the breast1; for these women, the 5-year survival rate is 98.6%.1 However, for women with metastatic breast cancer, the 5-year survival rate falls sharply, to 26%.1

When breast cancer spreads beyond the breast and the lymph nodes to the bones, liver, lung, and/or brain (ie, stage IV breast cancer), systemic therapy is warranted. Surgery and radiation therapy can be valuable adjunctive therapy in selected circumstances.2 Various factors influence the nature of systemic therapy, which includes hormone therapy, chemotherapy, targeted therapies, or some combination of these treatments. Although stage IV breast cancer is not curable, treatment can help to shrink the tumors, palliate the symptoms, and prolong survival.2

Approximately 66% of women with breast cancer have tumor cells that express estrogen and progestin receptors.3 Patients with these hormone receptor-positive cancers most often receive hormone therapy. Depending on whether they are premenopausal or postmenopausal, women with advanced breast cancer may receive aromatase inhibitors, such as letrozole, anastrozole, and exemestane, or other estrogen-blocking agents, such as toremifene, fulvestrant, and tamoxifen.3 For many women, hormonal therapy is administered as a series of single agents. For some, however, because the clinical benefit of hormone therapy can require several months, combination therapy is considered.2

Recent clinical trials of treatment combinations for women with estrogen receptor (ER)-positive breast cancer have included antiestrogens with aromatase inhibitors, as well as aromatase inhibitors with targeted agents.4 In a recent phase 3 clinical trial, the combination of anastrozole and fulvestrant demonstrated an improvement in progression-free survival (PFS) and overall survival (OS) in postmenopausal women with previously untreated metastatic disease.5

In 2012, the US Food and Drug Administration (FDA) approved the targeted agent everolimus for use in combination with exemestane for the treatment of postmenopausal women with advanced hormone receptor-positive, HER2-negative breast cancer.6 Compared with exemestane alone, everolimus plus exemestane demonstrated improved response rates and PFS in patients whose disease relapsed or was refractory to letrozole or anastrozole.6

It is critical that the treatment paradigm for postmenopausal women with ER-positive breast cancer maximizes efficacy and minimizes toxicity. Research efforts continue to identify novel therapies, including single agents and combinations that are effective and tolerable for this patient population.

On February 3, 2015, the FDA approved palbociclib (Ibrance; Pfizer), an orally administered inhibitor of cyclin-dependent kinase (CDK) 4 and CDK6, for use in combination with letrozole, for the first-line treatment of postmenopausal women with ER-positive, HER2-negative metastatic breast cancer.7,8

The new drug application for palbociclib was based on data from PALOMA-1, a phase 2 clinical trial.7-10 Palbociclib was approved under the FDA's accelerated approval program, which allows approval of a drug to treat a serious or life-threatening disease based on clinical data demonstrating that the drug has an effect on a surrogate end point that is reasonably likely to predict clinical benefit.7 Improvement in OS has not yet been demonstrated for palbociclib.7,10 The manufacturer must conduct confirmatory clinical trials to verify and describe the drug's clinical benefit7; PALOMA-2, a confirmatory phase 3 clinical trial with palbociclib and letrozole, is under way.9

According to Richard Pazdur, MD, Director of the Office of Hematology and Oncology Products in the FDA's Center for Drug Evaluation and Research, "The addition of palbociclib to letrozole provides a novel treatment option to women diagnosed with metastatic breast cancer." 7 He added, "The FDA is committed to expediting marketing approval of cancer drugs through our accelerated approval regulations."7

Palbociclib is an inhibitor of the enzymes CDK4 and CDK6. Activated by D-type cyclins, CDK4 and CDK6 promote cell-cycle entry by phosphorylating retinoblastoma protein and other proteins to initiate cell transition from the G1 phase to the S phase in the cell cycle.8 In preclinical studies, palbociclib reduced the growth of ER-positive breast cancer cell lines by preventing cells from transitioning from the G1 phase into the S phase.8 Studies using a patient-derived ER-positive breast cancer xenograft model demonstrated that palbociclib combined with letrozole enhanced the inhibition of retinoblastoma phosphorylation and tumor growth compared with each drug alone.8

The efficacy and safety of palbociclib combined with letrozole were demonstrated in PALOMA-1, a randomized open-label clinical trial.7-10 This multicenter study enrolled 165 postmenopausal women with ER-positive, HER2-negative metastatic breast cancer.8,11 Overall, 84 patients were randomized to receive palbociclib 125 mg once daily orally for 21 consecutive days followed by 7 days off treatment.8,10 Letrozole was given continuously throughout the 28-day cycle at a dose of 2.5 mg once daily. In total, 81 patients received letrozole alone (2.5 mg once daily). Patients continued therapy until progressive disease, unmanageable toxicity, or consent withdrawal.8,10

The clinical trial's primary end point was investigator-assessed PFS.8,10 Other end points included OS, overall response rate, and safety.8,10 The median duration of patient follow-up was 29.6 months in the palbociclib plus letrozole group versus 27.9 months in the letrozole-alone group.10

Table 1 summarizes the efficacy results of PALOMA-1. The combination of palbociclib and letrozole demonstrated superior PFS compared with letrozole alone-20.2 months versus 10.2 months, respectively (hazard ratio, 0.49; 95% confidence interval, 0.32-0.75).8 In addition, the investigator-assessed overall response rate in women with measurable disease was higher with palbociclib plus letrozole compared with letrozole alone (55% vs 39%, respectively).8 At the time of the final analysis of PFS data, OS data were not mature.8 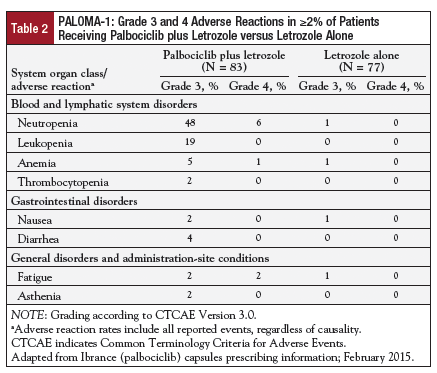 Palbociclib has no contraindications.8

When coadministered with strong cytochrome (CY) P3A inhibitors (eg, ketoconazole), the dose of palbociclib should be reduced to 75 mg once daily.8

The concomitant use of palbociclib with strong CYP3A4 inducers, such as phenytoin and rifampin, should be avoided.8

Complete blood counts should be monitored before starting palbociclib therapy and at the beginning of each cycle, as well as on day 14 of the first 2 cycles.8 Dose interruption, dose reduction, or delay in starting treatment cycles is recommended for patients with grade 3 or 4 neutropenia.8

Embryofetal toxicity. Based on its mechanism of action and on findings in animal studies, palbociclib can cause fetal harm.8 Women of reproductive potential should use effective contraception during therapy with palbociclib and for 2 weeks after the last dose.8

Pregnancy. Women who are pregnant while receiving palbociclib should be informed of the potential hazards to the fetus.8

Nursing mothers. It is not known whether palbociclib is excreted in human milk.8 Nursing women should discontinue breastfeeding during palbociclib therapy, because many drugs are excreted in milk.8

Pediatric use. The safety and efficacy of palbociclib have not been established in pediatric patients.8

Geriatric use. No overall differences in the safety or efficacy of palbociclib were observed between patients aged ≥65 years and younger patients.8

Palbociclib represents a novel mechanism of action for older patients with metastatic breast cancer. It has been shown to improve PFS when combined with letrozole in postmenopausal women with ER-positive, HER2-negative advanced breast cancer. In the United States, palbociclib is the first inhibitor of CDK4 and CDK6 to receive FDA approval for use in this subgroup of patients.