Policymakers are once again focusing attention on proposals to lower prescription drug costs. During the previous session of Congress, the US House of Representatives passed legislation H.R. 3 to allow the federal government to negotiate drug prices for the Centers for Medicare & Medicaid’s (CMS) Medicare Part D, Medicare’s outpatient prescription drug benefit, and private insurers. Under H.R. 3, the US Department of Health and Human Services’ secretary would negotiate prices for up to 250 brand-name drugs lacking generic or biosimilar competition with the highest net spending. In contrast, other drug price negotiation proposals placed no limit on the number of covered drugs subject to negotiation. In a similar vein, the Trump administration issued a final rule to establish a model through the CMS Innovation Center that would base Medicare’s payment for the 50 highest-spending Part B drugs (ie, drugs administered by physicians in outpatient settings) on the lowest price paid by certain other similar countries. (In light of pending litigation, the Biden Administration has stated that it will not implement this model without further rulemaking.)

These drug pricing proposals raise the question of whether limiting the number of drugs subject to government price negotiation or international reference pricing might leave substantial savings on the table, even if this approach is more administratively feasible than subjecting all drugs to negotiation or reference pricing. This analysis provides context for this question by measuring the share of total Medicare Part D and Part B drug spending accounted for by top-selling drugs covered under each part. For this analyses, we ranked drugs by total spending in 2019, based on data from CMS’ Medicare Part D and Part B drug spending dashboards. For Part D, we calculated estimates of net total spending, taking into account average rebates reported by the Congressional Budget Office.

Our analysis finds that a relatively small number and share of drugs accounted for a disproportionate share of Medicare Part B and Part D prescription drug spending in 2019 (Figure 1): 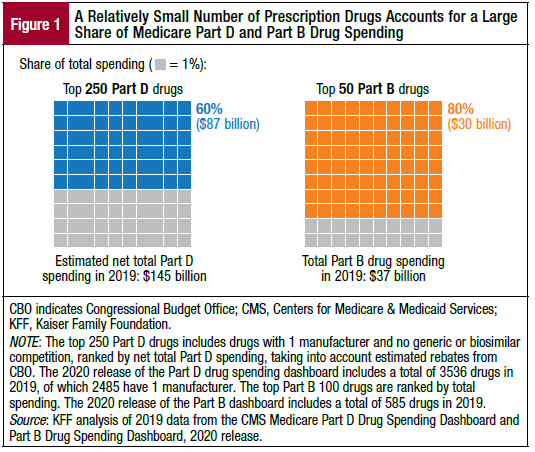 In 2019, Medicare Part D covered more than 3500 prescription drug products, with total spending of $183 billion, not accounting for rebates. Because drug-specific rebate data are not publicly available, we applied average rebates from a Congressional Budget Office (CBO) analysis of prices for top-selling brand-name drugs to derive an estimate of net Medicare Part D spending of $145 billion in 2019. For specialty drugs (which we identified as drugs with prices at or above $670 per claim, based on the amount of the Part D specialty tier threshold in 2019), we applied a rebate of 12%, and for nonspecialty brand-name drugs, we applied a rebate of 47%. We assumed no rebate for lower-cost generic drugs.

Our analysis shows that Part D drug spending is concentrated among a relatively small number of drugs with only 1 manufacturer and no generic or biosimilar competition: 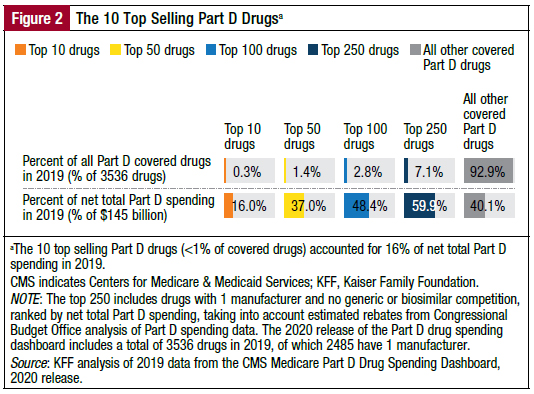 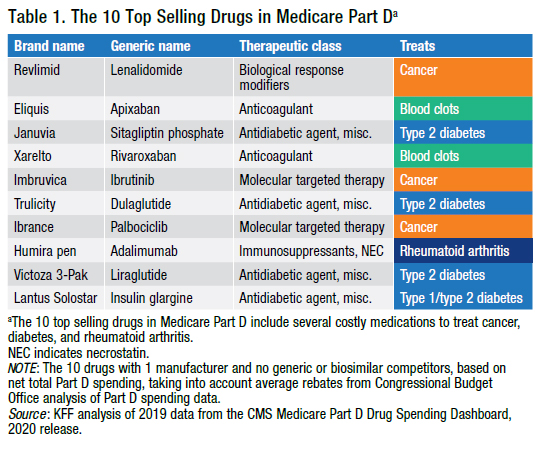 Medicare Part B covers prescription drugs administered by physicians and other providers in outpatient settings. Part B covers a substantially smaller number of drugs than Part D—fewer than 600 drug products in 2019, with total spending of $37 billion—but many Part B covered drugs are relatively costly medications. As is the case under Part D, drug spending under Part B is highly concentrated among a handful of medications: 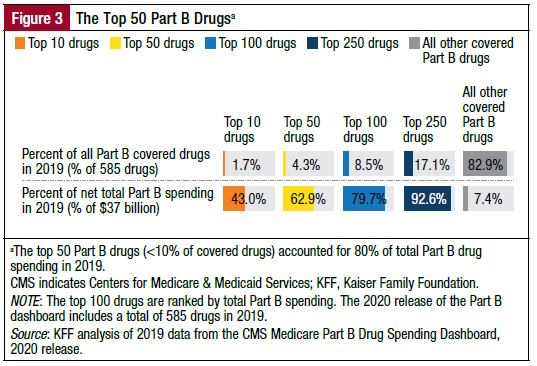 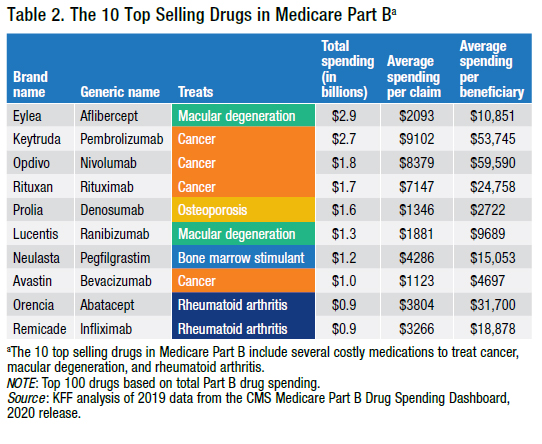 Some recent proposals to lower prescription drug prices have limited the number of drugs subject to price negotiation and international reference pricing. This analysis shows that Medicare Part D and Part B spending is highly concentrated among a relatively small share of covered drugs, mainly those without generic or biosimilar competitors. Focusing drug price negotiation or reference pricing on a subset of drugs that account for a disproportionate share of spending would be an efficient use of administrative resources, though it would also leave some potential savings on the table. In considering whether to broaden these proposals to focus on all prescription drugs, policymakers may want to consider whether doing so would achieve sufficient savings to justify the added administrative burden and associated costs.