Progression-free survival (PFS) was extended by 3.5 months with first-line atezolizumab (Tecentriq) plus bevacizumab (Avastin) in patients with metastatic renal-­cell carcinoma (RCC) versus standard-of-care sunitinib (Sutent) in the phase 3 IMmotion151 clinical trial presented at the 2018 Genitourinary Cancers Symposium. The PFS benefit of the combination of an immune checkpoint inhibitor and a vascular endothelial growth factor receptor (VEGFR) inhibitor was longer in patients with PD-L1–positive tumors. In addition, atezolizumab plus bevaciz­umab had an improved side-effect profile versus sunitinib. 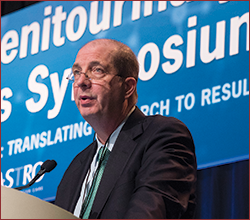 “For an aggressive cancer like this, where less than 20% of people survive 5 years after diagnosis, we think a 3.5-month longer progression-free survival, given the tolerability of this new combination treatment regimen, is an impor­tant development,” he added.

The IMmotion151 study randomized 915 patients with untreated metastatic RCC in a 1:1 ratio to treatment with atezolizumab plus bevacizumab or to sunitinib. No dose reductions were allowed for atezoliz­umab plus bevacizu­mab. The patients were stratified by PD-L1 expression; 362 (40%) patients had PD-L1–positive tumors according to ≥1% immunohistochemical staining on tumor-infiltrating immune cells.

The study included patients with clear-cell and sarcomatoid histology. The baseline characteristics were comparable between the 2 treatment arms in the patients with PD-L1–positive disease and for the entire study population. The primary end point was PFS.

“Survival is immature, but the hazard ratio of 0.68 favors the combination. We await the final survival analysis,” Dr Motzer said.