Although the overall incidence of multiple myeloma continues to increase, the mortality rates associated with this malignancy have declined during the past 20 years.1,6 Specifically, the advent of novel therapy options for multiple myeloma, as well as improvements in high-dose therapy and supportive care have contributed to extended survival for patients with multiple myeloma.6

New anticancer drugs and novel combinations have emerged in part because of improved understanding of the bone marrow microenvironment and the biology of multiple myeloma.7 Immune modulators and proteasome inhibitors now represent the cornerstones of initial treatment for multiple myeloma based on their ability to enhance the overall response rates and survival.2,7

Because novel agents have had a considerable impact on the US healthcare system, understanding their relative cost-effectiveness is important for ensuring efficient use. Overall, 2 recent evaluations of the economics of new agents in multiple myeloma resulted in similar conclusions.8,9 Using claims data from more than 2600 patients with multiple myeloma, one study showed that the 1-year cost of bortezomib-based therapy was similar to the cost of older drug combinations (approximately $112,000 each), whereas the costs of thalidomide- and lenalidomide-based regimens were significantly higher (approximately $130,500 and $159,200, respectively) than older combinations.8 In addition, patients taking thalidomide and lenalidomide had higher out-of-pocket costs because of Medicare Part D coverage gaps.8

Despite strides in the treatment of patients with multiple myeloma, patients will experience disease relapse after initial treatment, and multiple lines of therapy are typically required. Considerations for patients with relapsed or refractory multiple myeloma include the duration of response to previous treatment and the risk for toxicity. There remains a marked need for additional therapeutic options for this patient population.10

On November 20, 2015, the US Food and Drug Administration (FDA) approved ixazomib (Ninlaro; Takeda Oncology) capsules in combination with lenalidomide and dexamethasone for the treatment of patients with relapsed or refractory multiple myeloma who received at least 1 previous therapy.11,12 Ixazomib is the first oral proteasome inhibitor approved by the FDA for this patient population.11

Richard Pazdur, MD, Director of the FDA’s Office of Hematology and Oncology Products, said, “As we learn more about the underlying biology of multiple myeloma, we are encouraged to see the development of new ways to treat this disease. Today’s approval…provides patients with a new oral treatment that slows disease progression when other therapy has failed.”11

Ixazomib is a reversible proteasome inhibitor that preferentially binds to the beta 5 subunit of the 20S proteasome and inhibits its chymotrypsin-like activity.12 Based on in vitro studies, ixazomib induces apoptosis of multiple myeloma cell lines. It was also cytotoxic against myeloma cells from patients whose disease relapsed after previous therapies, including bortezomib, lenalidomide, and dexamethasone.12

If a dose of ixazomib is delayed or missed, the dose should be taken only if the next scheduled dose is ≥72 hours away. The patient should not take a double dose of ixazomib to account for the missed dose. Overall, 3 capsule strengths are available for ixazomib—4 mg, 3 mg, and 2.3 mg.12

The treatment cycles were repeated every 28 days in both study arms. Randomization was stratified according to the number of previous lines of therapy (1 vs 2 or 3), myeloma International Staging System (stage I or II vs stage III), and previous therapy status with a proteasome inhibitor (exposed vs not exposed).12-14

The primary efficacy end point in TOURMALINE-MM1 was PFS according to the 2011 International Myeloma Working Group Consensus Uniform Response Criteria.12 The response assessments were conducted every 4 weeks until disease progression.12-14

Demographic and baseline characteristics were similar between the treatment arms.12 The patients’ median age was 66 years.12 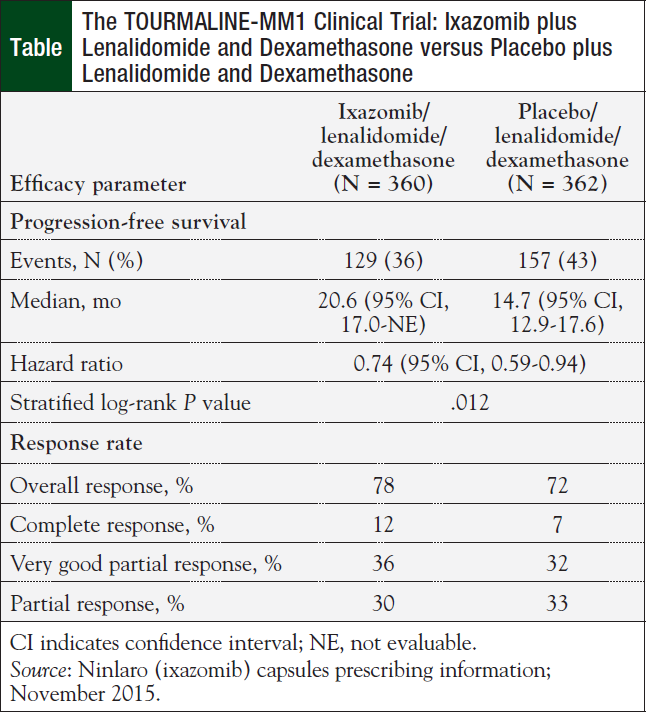 After a median follow-up of 23 months, a planned interim analysis of overall survival (OS) was conducted with 35% of the required number of deaths for the final OS analysis; an OS benefit was not demonstrated.12

Ixazomib does not have any contraindications.12

Thrombocytopenia. Platelet nadirs associated with ixazomib therapy typically occurred between days 14 and 21 of each 28-day cycle and recovered to baseline levels by the beginning of the next cycle.12 The discontinuation of ≥1 of the 3 drugs in the regimen because of thrombocytopenia occurred in <1% of patients who received the ixazomib combination and in 2% of patients who received the placebo combination.12

Platelet counts should be evaluated at least monthly during treatment with ixazomib.12

Gastrointestinal toxicities. Diarrhea, constipation, nausea, and vomiting occasionally required the use of antidiarrheal and antiemetic medications.12

Hepatotoxicity. Drug-induced liver injury, hepatocellular injury, hepatic steatosis, hepatitis cholestatic, and hepatotoxicity have each been reported in <1% of patients taking ixazomib.12 Patients receiving ixazomib should be tested for hepatic enzymes regularly, and the ixazomib dose should be adjusted if grade 3 or 4 events are observed.12

Pregnancy. Ixazomib can cause fetal harm when administered during pregnancy. Women should avoid becoming pregnant while taking ixazomib.12 Females of reproductive potential should be advised to use effective contraception during treatment with ixazomib and for 90 days after the final dose.12

Lactation. It is not known whether ixazomib or its metabolites are present in human milk.12 Women taking ixazomib should discontinue nursing.12

Men and women of reproductive potential. Effective contraceptives should be used while taking ixazomib and for 90 days after treatment with ixazomib.12

Pediatric use. The safety and effectiveness of ixazomib have not been established in children.12

Geriatric use. Of the patients with multiple myeloma in clinical studies of ixazomib, 55% were aged ≥65 years and 17% were aged ≥75 years.12 No differences in safety were observed between the younger and older cohorts.12

Renal impairment. In patients with severe renal impairment or end-stage renal disease requiring di­alysis, blood levels of ixazomib increased by 39% compared with normal renal function.12 The starting dose of ixazomib should be reduced in this patient population. Because ixazomib is not dialyzable, it can be administered without regard to dialysis timing.12