Colony-stimulating factors (CSFs) are endogenous glycoproteins that regulate the production and the functioning of infection-protective granulocytes and macrophages.1 Overall, 2 types of recombinant CSF drugs—granulocyte CSF (filgrastim, pegfilgrastim) and granulocyte-macrophage CSF (sargramostim)—have been prescribed for more than 20 years to stimulate neutrophils and macrophages, primarily in patients with cancer who are undergoing treatment with cytotoxic chemotherapy.1 CSFs also have clinical value in the transplantation of hematopoietic cells to replace aplastic bone marrow.1

Biologics represent a significant and growing proportion of drug expenditures.3 It is estimated that 6 of the top 10 drugs in 2018, in the United States and globally, will be biologics, and will account for 49% of the top-selling 100 drugs.3

Signed into law in March 2010, the Biologics Price Competition and Innovation Act (BPCIA) of 2009 was passed in conjunction with the Affordable Care Act of 2010.4 The goal of the BPCIA was to give drug manufacturers a pathway to an abbreviated approval process for biologics that are shown to be biosimilar to or interchangeable with a reference drug, which is a biologic drug that is licensed by the US Food and Drug Administration (FDA).4 Modeled after the legislation that allows the development and the approval of generic alternatives to small-molecule drugs, BPCIA was designed to encourage competition and innovation.4

Specifically, BPCIA created a pathway for developers of biosimilars to rely on existing scientific data about the safety and effectiveness of the reference drug.4 Approval of a biosimilar does not require a full complement of drug-specific preclinical and clinical data. For the FDA to approve a biosimilar, the following criteria must be met4:

The main objective of introducing biosimilars to the US market is the expected lower costs of biosimilars compared with their reference drugs. Although the cost is not expected to be as low as for small-molecule generics, it is expected to be less than the original biologic, which will result in increased patient access.4,5

Filgrastim-sndz is approved for the same 5 indications as its reference drug filgrastim9,10:

The FDA’s approval of filgrastim-sndz was based on a review of evidence that included structural and functional characterization, animal study data, human pharmacokinetic and pharmacodynamics data, clinical immunogenicity data, and other clinical safety and effectiveness data that demonstrate that filgrastim-sndz is biosimilar to filgrastim.5,8 Filgrastim-sndz has been approved as a biosimilar drug, but not as an “interchangeable” drug; therefore, it cannot be substituted for filgrastim without authorization from the prescriber.5

According to FDA Commissioner Margaret A. Hamburg, MD, “Biosimilars will provide access to important therapies for patients who need them. Patients and the health care community can be confident that biosimilar products approved by the FDA meet the agency’s rigorous safety, efficacy and quality standards.”5

Filgrastim-sndz is a granulocyte CSF, like its reference drug. CSFs affect hematopoietic cells, including neutrophil progenitors, by binding to specific cell-surface receptors and stimulating growth‚ differentiation commitment‚ and some end-cell functional activation.9

Granulocyte CSF only minimally affects the production of hematopoietic cell types other than neutrophils.9

Patients with cancer undergoing bone marrow transplantation. The recommended starting dose is 10 mcg/kg daily administered as an IV infusion for no longer than 24 hours.9

Patients undergoing autologous peripheral blood progenitor cell (PBPC) collection and therapy. The recommended starting dose is 10 mcg/kg daily via subcutaneous injection.9 The drug should be administered for at least 4 days before the first leukapheresis procedure and continued until the last procedure.9

Patients with cyclic or idiopathic neutropenia. The recommended starting dose is 5 mcg/kg daily via subcutaneous injection.9

The PIONEER Trial with Filgrastim-sndz

Comprehensive studies were performed to fully characterize and evaluate filgrastim-sndz to meet the FDA’s requirements for its approval as a biosimilar (Table).6,9,10,12 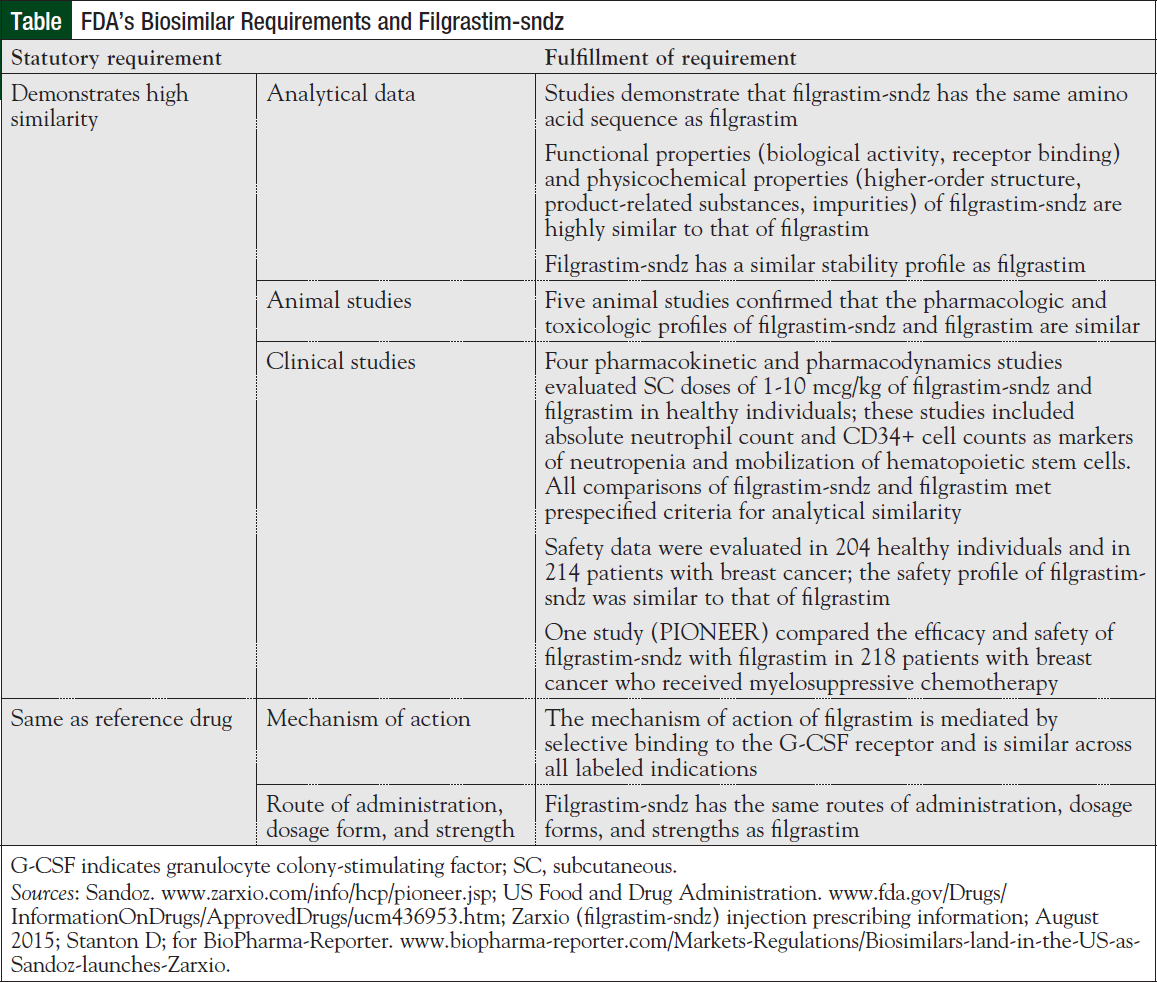 In addition, a randomized, double-blind, 4-group, multicenter, phase 3 noninferiority clinical trial known as PIONEER enrolled patients with breast cancer who received myelosuppressive chemotherapy. The study was designed to compare the efficacy and safety of filgrastim-sndz with filgrastim in terms of reducing the duration of severe neutropenia.13

Patients enrolled in PIONEER received the biosimilar or the reference drug at a daily dose of 5 µg/kg body weight via subcutaneous injection starting on day 2 of each chemotherapy cycle until the absolute neutrophil count recovered to 10 × 109/L after nadir or for a maximum of 14 days. The study lasted 25 weeks—3 weeks of screening, 18 weeks of treatment (a total of 6 cycles, 3 weeks each), and 1 follow-up visit 4 weeks after the last dose of the study drug.13

The primary objective of PIONEER was to assess the efficacy of filgrastim-sndz in reducing the duration of severe neutropenia after the first chemotherapy cycle. The per-protocol patient group included 204 of the 218 randomized patients. The safety data set included 214 patients who received at least 1 dose of the study drug. On average, each patient received treatment with filgrastim-sndz or with filgrastim for 8 to 9 days per chemotherapy cycle.13

No differences in the rates of treatment-emergent adverse events were observed among the treatment arms in the PIONEER clinical trial. Overall, 12 patients experienced serious adverse events, including 1 death because of pulmonary embolism, but none of these events was deemed related to the study drug. None of the patients enrolled in the PIONEER study developed antidrug antibodies.13

The most common adverse reactions observed in clinical studies that supported the approval of the reference drug, filgrastim, include9:

Filgrastim-sndz is contraindicated in patients with a history of serious allergic reactions to human granulocyte CSFs, such as filgrastim or pegfilgrastim drugs.9

Splenic rupture. Splenic rupture, including fatal cases, can occur after the administration of filgrastim drugs. Patients who report left upper abdominal or shoulder pain should be evaluated for an enlarged spleen or splenic rupture.9

Acute respiratory distress syndrome (ARDS). ARDS has been reported in patients receiving filgrastim therapy. Filgrastim-sndz should be discontinued in patients with ARDS.9

Capillary leak syndrome (CLS). CLS has been reported after the use of a granulocyte CSF, including filgrastim drugs; these episodes can be life-threatening.9 Patients with symptoms of CLS should be closely monitored and should receive standard symptomatic treatment, which may include a need for intensive care.9

Leukocytosis. Filgrastim-sndz should be discontinued if the leukocyte count increases to >100,000/mm3 during the administration of filgrastim-sndz for PBPC mobilization.9

Potential effect on malignant cells. The potential for filgrastim-sndz to act as a growth factor in any patient with cancer cannot be excluded.9

Nuclear imaging. Transient positive bone-imaging changes can occur in response to growth factor therapy and should be considered when interpreting bone-imaging results.9

Pregnancy. The use of filgrastim-sndz in pregnant women has not been adequately studied. Filgrastim-sndz should only be used during pregnancy if its potential benefits justify the potential risk to the fetus.9

Nursing mothers. It is not known whether filgrastim drugs are excreted in human milk.9

Pediatric use. Because the filgrastim-sndz prefilled syringe may not accurately measure volumes <0.3 mL, the direct administration of volumes <0.3 mL is not recommended. The safety and effectiveness of filgrastim have been established in pediatric patients with severe chronic neutropenia. Limited data do not suggest alterations in sexual maturation or endocrine function. Cytogenetic abnormalities and transformation to myelodysplastic syndrome and AML have been reported in pediatric patients with congenital neutropenia who received filgrastim treatment. The relationship between these events and filgrastim administration is not known.9

Geriatric use. No overall differences in the safety or effectiveness of filgrastim were observed between older and younger patients who received myelosuppressive chemotherapy.9

Filgrastim-sndz is the first biosimilar drug approved by the FDA for use in the United States. A series of studies, including a large clinical trial, demonstrated that the efficacy and safety of filgrastim-sndz is comparable to the reference drug, filgrastim, in preventing neutropenia in patients with cancer. According to the manufacturer, filgrastim-sndz is priced 15% lower than the price of its originator drug. Healthcare stakeholders hope that biosimilars will eventually be priced up to 40% less than their reference drugs, which may occur when more biosimilars are approved for the same originator drug; this may help to bring costs down through market forces.