Acute myeloid leukemia (AML) is a rare but deadly cancer. Approximately 21,400 new cases of AML were diagnosed in 2017 in the United States, and nearly 10,600 people died from the disease.1 Approximately 60% to 70% of adults with AML respond to initial treatment with cytotoxic chemotherapy.1 However, the 5-year survival rate for patients with AML remains poor at approximately 27%.2

The treatment of AML in adults has undergone major changes in 2017.3,4 To supplement cytogenetic testing, measuring minimal residual disease (MRD) is being integrated into clinical practice based on the value of MRD as a prognostic factor.3 In addition, after 40 years of no new drugs for AML, the US Food and Drug Administration (FDA) approved several novel targeted drugs, including midostaurin (Rydapt; an FLT3 inhibitor), ena­sidenib (Idhifa; an IDH inhibitor), and gemtuzumab ozogamicin (Mylotarg; an antibody drug conjugate), for the treatment of AML.5-7

On August 3, 2017, the FDA granted an accelerated approval for the new combination of daunorubicin and cytarabine liposome (Vyxeos; Jazz Pharmaceuticals), an intravenously infused drug, for the treatment of adults with newly diagnosed therapy-related AML or AML with myelodysplasia-related changes.5,8,9 The FDA granted this drug breakthrough therapy and orphan drug designations for this indication.8 Full FDA approval is contingent on additional evidence from clinical trials. Both drugs are already available as individual chemotherapies.

“This is the first approved treatment specifically for patients with certain types of high-risk AML. Vyxeos combines two commonly used chemotherapies into a single formulation that may help some patients live longer than if they were to receive the two therapies separately,”8 said Richard Pazdur, MD, FDA’s Director of Oncology Center of Excellence.

The first consolidation cycle should be given 5 weeks to 8 weeks after the start of the last induction cycle. The recommended dose for each cycle of consolidation therapy is daunorubicin 29 mg/m2 and cytarabine 65 mg/m2 liposome via a 90-minute IV infusion on days 1 and 3.9

The efficacy of the daunorubicin plus cytarabine liposome formulation was evaluated in a randomized, multicenter, open-label, phase 3 clinical trial that compared this novel combination with a standard combination of cytarabine and daunorubicin (7+3) in patients aged 60 to 75 years with newly diagnosed therapy-related AML or AML with myelodysplasia-related changes. Patients were randomized and stratified by age and by AML subtype.9,10

The efficacy of the liposome formulation was established on the basis of overall survival data from the date of study randomization to death from any cause. The median overall survival was 9.6 months in the liposome formulation arm versus 5.9 months in the standard formulation arm (hazard ratio, 0.69; 95% confidence interval, 0.52-0.90; P = .005; Table).9,10 The complete remission rate was 38% versus 26%, respectively (P = .036).9 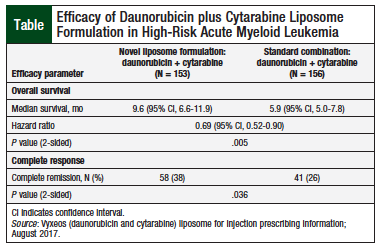 Overall, 9 (6%) patients in each study arm had fatal adverse reactions unrelated to disease progression while receiving treatment or within 30 days of therapy.9 Among recipients of the liposome formulation, these adverse events included infection, central nervous systems hemorrhage, and respiratory failure.9 All-cause day-30 mortality was 6% with the liposome formulation versus 11% with the standard formulation.9 During the first 60 days of the study, 14% of patients died in the investigational arm compared with 21% of patients in the standard treatment arm.9

The most common (≥5%) serious adverse reactions with the liposome formulation were dyspnea, myocardial toxicity, sepsis, pneumonia, febrile neutropenia, bacteremia, and hemorrhage. Treatment discontinuation because of adverse reactions occurred in 18% of the new formulation recipients versus 13% of the standard formulation recipients.9 Adverse reactions leading to treatment discontinuation included prolonged cytopenias, infection, cardiotoxicity, respiratory failure, hemorrhage, renal insufficiency, colitis, and generalized medical deterioration. Common adverse events were less frequent during the consolidation phase than in the induction phase. Incidence rates of chills, dizziness, and pyrexia were similar between the induction and consolidation cycles.9

Dosage adjustment of the new formulation is not required for patients with mild or moderate kidney dysfunction or in patients with bilirubin levels ≤3 mg/dL.9

Women of childbearing potential should use effective contraception during treatment with the new formulation and for 6 months after the last dose.9

Serious or fatal hemorrhagic events with associated prolonged thrombocytopenia have occurred with the new formulation.9

Daunorubicin has been associated with local tissue necrosis at the site of drug extravasation.9

The novel liposome-encapsulated formulation of 2 previously available chemotherapy agents, daunorubicin and cytarabine, has demonstrated efficacy and low all-cause 30-day mortality in patients aged 60 to 75 years with high-risk, newly diagnosed therapy-related AML or AML with myelodysplasia-related changes. This novel combination therapy is the first treatment approved specifically for this patient population and may become a new standard of care for older patients with these forms of high-risk AML.