Diffuse large B-cell lymphoma (DLBCL), a form of cancer that starts in the lymphatic system, is the most common type of non-Hodgkin lymphoma (NHL) in adults.1,2 In the United States, approximately 72,000 new cases of NHL are diagnosed annually; more than 20,000 people were estimated to die from the disease in 2017.3

For patients with DLBCL that does not respond to chemotherapy or subsequent regimens and disease that relapses within a year after having autologous stem-cell transplantation, the prognosis is particularly poor.4,5

“Today marks another milestone in the development of a whole new scientific paradigm for the treatment of serious diseases. In just several decades, gene therapy has gone from being a promising concept to a practical solution to deadly and largely untreatable forms of cancer,”6 said FDA Commissioner Scott Gottlieb, MD.

The FDA granted axicabtagene ciloleucel a priority review, orphan drug status, and a breakthrough therapy designation for this indication.6

Axicabtagene ciloleucel is a CD19-directed, genetically modified, autologous T-cell immunotherapy, which is a customized treatment that uses the patient’s own immune system to help fight lymphoma.6,8 This therapy binds to CD19-expressing cancer cells and normal ­B-cells. Axicabtagene ciloleucel targets the CD19-expressing cancer cells and their downstream signaling cascades that lead to T-cell activation, proliferation, and the release of inflammatory cytokines, which results in apoptosis of CD19-expressing cells.8

The patient’s peripheral blood cells are obtained via a standard leukapheresis procedure. After the cells are modified, expanded, and formulated into a suspension, they are infused back into the patient. Once reinfused into the patient, the anti-CD19 CAR T-cells recognize and eliminate CD19-expressing target cells.8

The FDA approval of axicabtagene ciloleucel was based on safety and efficacy results from the ZUMA-1 study, a single-arm, open-label, phase 2 clinical trial of adults with relapsed or refractory aggressive B-cell NHL.4,8 After receiving lympho-depleting chemotherapy, 101 patients (median age, 58 years) received axicabtagene ciloleucel as a single intravenous infusion at a target dose of 2 × 106 CAR-positive viable T-cells/kg (maximum permitted dose of 2 × 108 cells). All patients were hospitalized for the infusion and remained hospitalized for at least 7 days thereafter.8 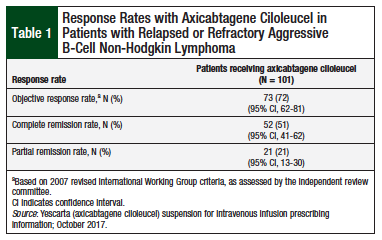 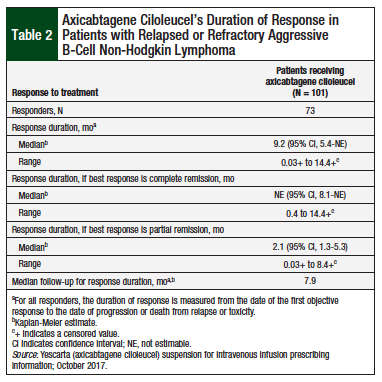 Axicabtagene ciloleucel has no contraindications.8

Patients should be monitored for hypersensitivity reactions during infusion, as well as for signs and symptoms of infection, and be treated appropriately.8

After infusion with axicabtagene ciloleucel, patients may exhibit grade 3 or higher cytopenias for several weeks. Patients should be monitored via complete blood counts.8

Patients should also be monitored for hypogammaglobulinemia and provided with replacement therapy.8

Any secondary malignancy that occurs after treatment with axicabtagene ciloleucel should be reported to the manufacturer.8

Patients should be advised to refrain from driving and engaging in hazardous occupations or activities, such as operating heavy or potentially dangerous machinery, for at least 8 weeks after receiving axicabtagene ciloleucel.8

Axicabtagene ciloleucel is not recommended for pregnant women; posttreatment pregnancy should be discussed with the treating physician. The pregnancy status of women of reproductive potential should be verified, or tested, if appropriate. The data are insufficient to determine the effect of axicabtagene ciloleucel on fertility or to provide a clear recommendation on the duration of posttreatment contraception.8

The data are also insufficient to determine whether patients aged ≥65 years respond to axicabtagene ciloleucel different from, or have different safety outcomes than, younger patients.8

With its FDA approval, axicabtagene ciloleucel became only the second gene therapy to be approved in the United States and the first CAR T-cell/gene therapy to be approved for the treatment of adults with several types of relapsed or refractory large B-cell lymphoma. In the pivotal clinical trial YUMA-1, 72% of patients who received axicabtagene ciloleucel achieved an objective response, of whom 51% achieved a complete remission. Axicabtagene ciloleucel, a CD19-directed CAR T-cell immunotherapy, is a new treatment option that may improve outcomes for patients with certain types of large B-cell lymphoma.